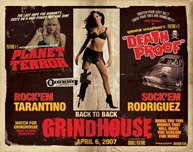 Deadline Hollywood Daily is reporting that the Quentin Tarantino and Robert Rodriguez double-feature Grindhouse has disappointment written all over it’s first weekend numbers. The movie’s opening is on track to come in far below the $25 million touted just a few days ago. Currently Grindhouse is looking at a take of around $13 million. This isn’t just bad news for fans of Tarantino/Rodriguez, but it’s also bad news for movie fans who want to support movies made without studio pressure and test audience reaction. Harvey and Bob Weinstein left Disney to form a company that trusts it’s directors and writers. I’m planning on seeing Grindhouse next weekend and I’ll post my impressions here. If other reviews I’ve read are correct, Grindhouse is a good film that stands up to the best both Tarantino and Rodriguez have produced in the past. Do we want to continue getting this glut of high budget crap that studios churn out, or do we want more oringial and innovative filmmaking? For god’s sake, folks, stop seeing crap like Wild Hogs, Ghost Rider, and Norbit.