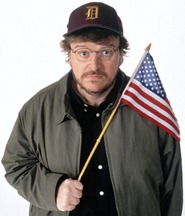 I almost didn’t publish this post because it’s really not surprising, but Advertising Age is reporting that Michael Moore’s forthcoming documentary, ‘Sicko’, is already showing up on peer-to-peer networks. Scheduled for a June 29th release, the film is a scathing attack on the U.S. health care system and the difficulty so many people have affording the high cost of coverage. Of course, it’s nearly impossible to determine how this will affect box office receipts since its difficult to determine if downloaders would have payed to see the film if it wasn’t available on the net. My personal feeling is that it won’t affect the film’s gross since Moore’s audience largely consists of educated, upper middle class thirty-somethings who have already decided to see the film in theaters. But either way this isn’t good news for The Weinstein Company or Moore. After poor showings from their last couple of productions, the Weinstein brothers are hoping for a big return on their investment, ala Moore’s record-holding ‘Fahrenheit 9/11’. As for himself, Moore is under investigation by the U.S. government for a trip to Cuba he took with 9/11 survivors shown in the film. Many speculate the investigation is politically motivated, fueled by anger over the drubbing the current administration received in ‘Fahrenheit’.