‘No Country for Old Men’ Is Critic’s Fav 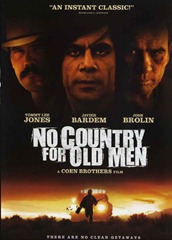 Three major critic associations have named the Cohen brothers’ latest epic ‘No Country for Old Men’ the top film of 2007. The National Board of Review, Boston Society of Film Critics, and the New York Film Critics Online association rated No Country above other 2007 critic favorites ‘Atonement’, ‘Sweeney Todd’, ‘The Assassination of Jesse James By The Coward Robert Ford’, and ‘There Will Be Blood’. No Country is also on pace to become the highest grossing Cohen brothers’ film to date. The brothers’ previous best was the 2000 hit ‘O Brother, Where Art Thou?’ which pulled in $45m domestically. No Country is currently at $30m and had double the average take per theatre on opening weekend than O Brother . However, Miramax still hoped to see a bigger box office after putting much more in the marketing end than earlier Cohen brothers’ efforts. Expect to see less enthusiasm from distributors on future Cohen projects.