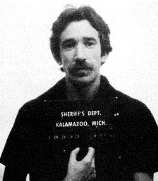 First off, yes, that is Tim Allen (then, Timothy Alan Dick) posing for the Sheriff’s Department in Kalamazoo, Michigan. I’ll get back to that story in a second, though. The Tim Allen News-of-the-Day is that he has signed on to be in David Mamet’s upcoming martial arts drama. I never thought I would put Tim Allen, David Mamet, and martial arts drama all together in the same sentence. It is a crazy world indeed.

Variety is reporting that David Mamet will be directing Tim Allen, Chiwetel Ejiofor, Joe Mantegna, and a bunch of professional martial artists and fighters in his next film, Redbelt. The story, written by Mamet, follows a Jiu-jitsu master (Ejiofor) who jeopardizes his integrity after being seduced by the movie business and influenced to compete in ultimate fighting matches. Ejiofor, an exellent actor, is currently training with members of the Gracie family who are known worldwide for their Brazilian-style Jiu-jitsu. Tim Allen plays a troubled action star who meets the master after getting his ass kicked in a street fight.

Don’t be put off by Tim Allen starring in a drama. The last time Mamet cast a comic actor in a dramatic role it turned out pretty good. Remember Steve Martin in The Spanish Prisoner? Everything about this film sounds pretty cool. The key to it all will be if Mamet can direct fighting scenes. Apparently, he has some of the best martial artists and fighters in the world in the film, so it can’t be that hard. Sony Pictures Classic is putting the money up for Redbelt which starts production next month in Los Angeles.

Now, back to that mugshot. In 1978, Tim Allen was arrested in a drug bust and spent three years in jail because of it. It was in jail that Allen developed his comedy routines for protection because as he put it, “Humor was the best defense I had.” After he got out of jail, Allen started doing the comedy stand-up circuit which led to the career he has today. When I read about all of this, I developed a new respect for Tim Allen that I never had. I’m looking forward to see what he can do in a more serious role. Guess we’ll find out next year when Redbelt is released.