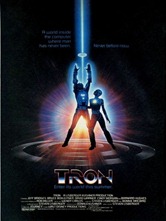 After months of rumors, Jeff Bridges himself has confirmed that Hollywood is going try and cash in on generational nostalgia. In an interview with cinemablend.com, Bridges not only said a sequel of the 1982 sci-fi hit Tron is in the works but that he’s considering taking part in the film. When I heard about the possibility of a sequel, my eyes rolled at the thought of studio executives trying to cash in on the emotional ties of the 30 something demographics increasing spending power. Do such motivations ever result in decent films? Don’t worry about this pollution taking your money yet, the project is in the early stages and won’t see screens any time before 2010.