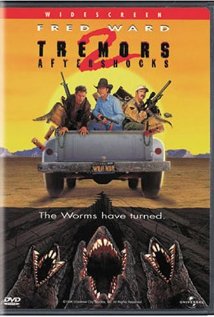 : Aftershocks is the continuation of the Tremors story about the monsters that live underground. However, these monsters are striking against people in a Mexican oil refinery. Now it is up to Earl to put the threat in its place. You will find comedy, thrills, and chills from this sequel. Keep in mind that this is a thriller so children should watch this film with a parent. What else lurks in the shadows alongside the Tremors threat? Will Earl be able to defeat the evil creatures? You need to watch a copy of this film on Netflix or Amazon to find out. To learn more, go to http://www.imdb.com/title/tt0114720/?ref_=sr_2. This movie gets a five out of five popcorns rating.