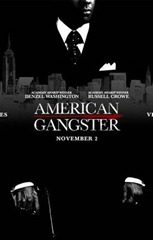 The movie has a sequence that revolves around the head gangster in church; religious music is the predominant sound as scenes flash from violence involving the gang, then back to their leader in church. Is this THE GODFATHER? No, it’s AMERICAN GANGSTER, where Ridley Scott blatantly rips off this concept. Too bad, because this film has strong performances by Russell Crowe as Detective Richie Roberts, and Denzel Washington as Frank Lucas.

Other actors are impressive in small parts. Ruby Dee had an Oscar nomination for her role as Mama Lucas. Cuba Gooding Jr., Josh Brolin and Armand Assante enrich the supporting cast. Then there’s the dog, which proves that an animal lover can’t be all bad.

The story is loosely based on the true story. Detective Roberts is notoriously known as an honest cop, and he’s devoted to ending Lucas’s rule in Harlem. The surprise is who becomes his greatest asset, and the person who ends up being the gangster’s trusted and true friend. The fascinating view we are shown into Lucas’s involved drug trade, policemen on the take, and restricted lives of the players make the movie well worth watching.

Just saw a picture on CNN of Bobby Cutts, Jr. He’s the police officer who murdered his pregnant girlfriend. My first though was that he looked like an actor from AMERICAN GANGSTER. Seems to validate the authentic feel of the movie. If you don’t mind the violence, this is a movie that keeps you involved throughout. Even when you think it’s over, it continues to astonish.