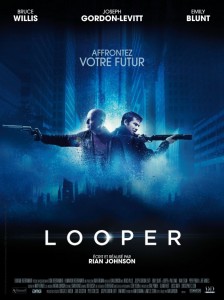 Since I wasn’t able to see it in the theater, I’ve anxiously awaited the DVD release of Looper, the Joseph Gordon-Levitt and Bruce Willis sci-fi mind-bender. Early reviews touted the movies film noir bona fides and all but predicted a cult following. Dystopian sci-fi thrillers are probably my favorite genre and though not perfect Looper did not disappoint. Without giving too much away, Joseph Gordon-Levitt plays a mob contract killer (specifically a “looper”) named Joe in the year 2044. His targets are sent from the year 2074, when time travel is discovered, outlawed soon after, and used by criminal organizations to send individuals they wish to eliminate 30 years into the past. Technology in 2074 has made it impossible to hide a body and the unlucky who face this wrath are bound and hooded, their torso strapped with the loopers payment, and sent to the past where the looper is waiting. Furthermore, the mob periodically “closes loops” by sending the future looper to the past where he is killed by his younger self. When the looper opens the targets shirt to retrieve his payment an exceptionally large one indicates the target is himself and the loopers services are no longer needed. With the money, the looper can enjoy the next 30 years as he pleases (his only onus is knowing when he’ll die). Granted, for anyone who wants to nitpick the potential time travel paradoxes in the plot, there is ample material to work with. Amusingly, Bruce Willis’ character, answers such criticism in the film when he says to Gordon-Levitt “I don’t want to talk about time travel because if we start talking about it then we’re going to be here all day talking about it, making diagrams with straws”. But as long as you keep yourself from arguing with the movies mechanics, you’ll discover a well-made film with solid pacing, strong acting, directing and cinematography. When you’re in the mood for a dark mystery which keeps you engaged throughout and thinking long after, don’t hesitate to give an hour and a half of your time to Looper.