Eli Roth Not A Hack? 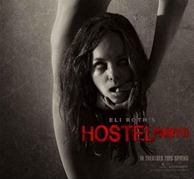 I haven’t seen Cabin Fever or Hostel, so it might seem a little strange that the first Eli Roth film I saw was Hostel Part II.  Until now I have to admit that I was influenced by the venom that Roth provokes from some people, such as one of my favorite bloggers Nikki Finke (see here, here, here, here, and here) who personally named Roth “Enemy No. 1”. So on a lazy Sunday afternoon, with no other options I reluctantly agreed to watch the recently released sequel. To my surprise, I found the film well written and well made – not the typical mind numbing horror film that’s come out during the ‘horror renaissance’ Hollywood has gone through over the past few years. Apparently Roth plans on expanding out from the horror genre and it’ll be interesting to see what this solid director and writer will produce. In the short term, though, Roth is slated to helm one more scary send-up with the Stephen King penned ‘Cell’.