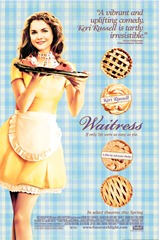 The opening scene of WAITRESS is deliciously seductive. I longed to be a part of it. I wanted to dip into each pie for a taste. Jenna (Keri Russell) is a pie artist who seduces the other characters with her plucky charm and scrumptious pies, and uses her new menu creations to help tell the story.

The plot’s main ingredients are:

-the unhappy marriage between Jenna and Earl (Jeremy Sisto), who is insecure and super-controlling

But the pies are the crème fraiche folded into the chocolate mousse plot poured into the whole story crust.

The story is sweetened with two other waitresses at the diner, Becky (Cherly Hines) and Dawn (Adrienne Shelly), and Ogie (Eddie Jimison). They all add their problems, support, and comedy to the movie.

Keri Russell carries the movie with her amazing character. Her interaction with Andy Griffith is especially endearing. He plays the almost opposite of any other role I’ve ever seen him in, and he plays it very convincingly.

It’s a story with turns that are all worth taking. After watching it once, I immediately watched it again. Everyone should try it the first time. Just make sure you aren’t hungry.