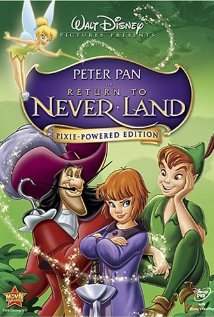 nd the gang made a comeback in Return to Never Land, which was released in 2002. Hook takes Wendy’s daughter, Jane, by mistake in this film. Peter Pan must do everything in his power to help return Jane to her very worried mother. Jane does not believe in fairytales though, which makes Peter Pan’s job much harder than it probably should be. Will he get Jane back home? Can he thwart Hook as he always has? You will have to find a copy of this sequel to find out for yourself this year. To learn more about Disney’s wonderful Peter Pan film, you need to go to http://www.imdb.com/title/tt0280030/?ref_=sr_1. This movie gets a five out of five popcorns rating.