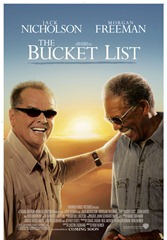 Crematoriums and makers of receptacles for creamains everywhere were more than likely alarmed by scattering of Donny’s ashes in The Big Lebowski.  His two friends, the Dude (Jeff Bridges) and Walter (John Goodman), didn’t have the money for an urn, so they used a Folger’s coffee can.  But the preference for a Chock Full ‘o Nuts coffee can by Carter (Morgan Freeman), and the aversion to urns by the wealthy Edward Cole (Jack Nicholson) must have greatly alarmed the industry.  Indeed, after watching the movie, I have a Trader Joe’s Chocolate Truffle can that would suit me perfectly.

This movie gives you a lot to contemplate.  What would you like to do before you “kick the bucket?”  Both the men find themselves in a hospital room together, and it’s not “friends at first sight.”  But they are both in the inevitable situation to seriously consider how to live the rest of their now limited life.  Edward Cole’s money allows them both to become active in checking off their “Bucket Lists.”  Carter’s amazing (and hard to believe) recall of facts enhances each experience.

Jack Nicholson, as always, plays Jack Nicholson.  And Morgan Freeman is the same unflappable character he portrayed in Driving Miss Daisy, The Shawshank Redemption, Million Dollar Baby, and the movies where his character is the Almighty.  His quite insistence is more forceful than the opposition.  When he does get more demanding, he is not to be denied.

The character that seemed most convincing was Thomas (Sean Hayes).  He endured all the insults and put-downs from Edward Cole without those ever breaking his spirit.  His importance and endearment to Cole was always evident in his character’s heart.  In his scenes with Jack Nicholson he not only held his own, but often was the more memorable.

Bucket Lists become a priority to those more mature people who see this movie.  And coupled with Randy Pausch’s Last Lecture, it becomes a way of life.