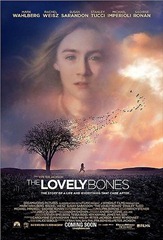 This movie was so hard to watch because I read the book beforehand and already knew the basic story and outcome. I deliberately read the book first because I heard it was an amazing story and books tend to be better than the movies that follow, however I have to say that the movie Lovely Bones was just as good as the book.  It was so moving and so emotional. At some point, every parent has feared the worst and seeing this movie just brings all that fear home. After being murdered, 14 year old Susie has to watch the murderer get away, her parents deal with the quilt and sadness her death has caused them, and her other siblings lives change dramatically for the worse. From her own heaven, Susie finally learns that the only way she can move on and stop missing her family is to give up on the vengeance that she thinks the man who murdered her deserves.